Oh Hey I Wrote a Thesis

A few people have said they want to read the thesis I completed last year so I figured I'd put the theory part up here. I haven't formatted it properly for the blog because then I might accidentally read some of it which would be horrifying.
If anyone is interested in reading the creative half, hmu and I can email it to you.
Read more »
Posted by Bonny at 15:15 No comments: 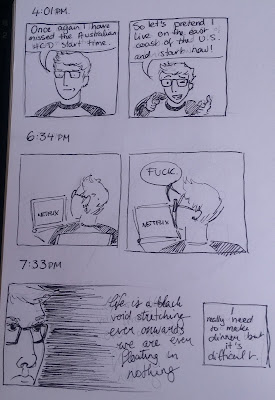 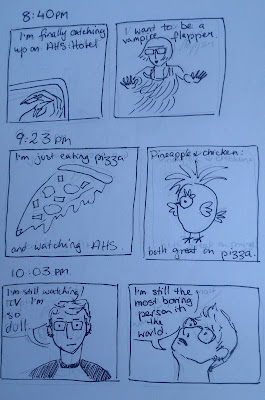 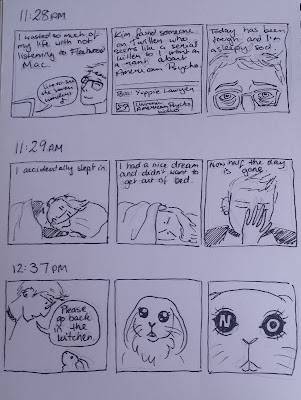 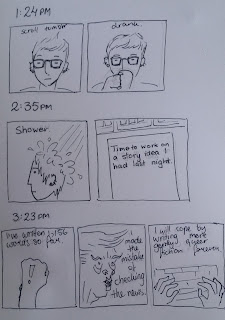 The Dark That Ate the World - Comic 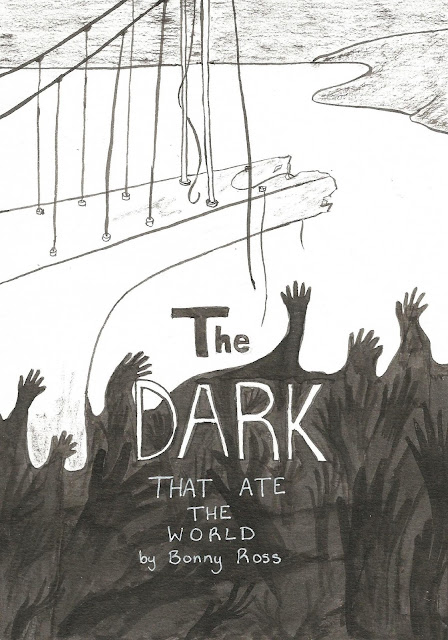 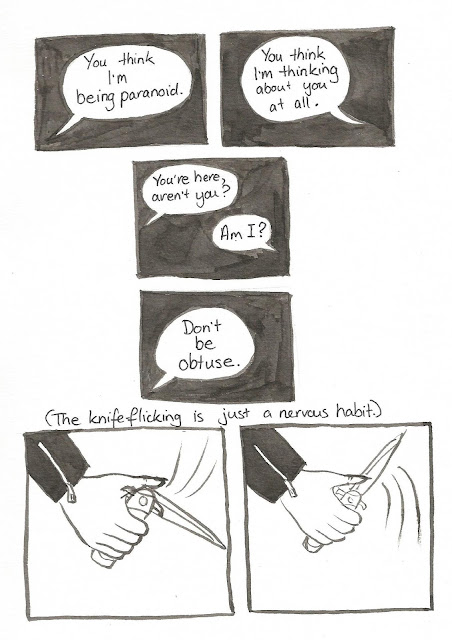 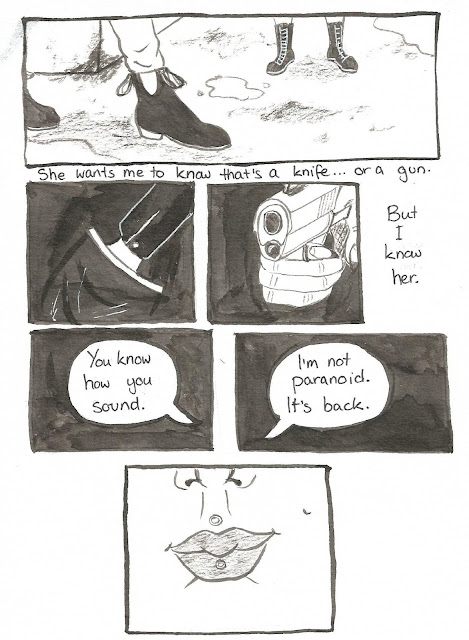 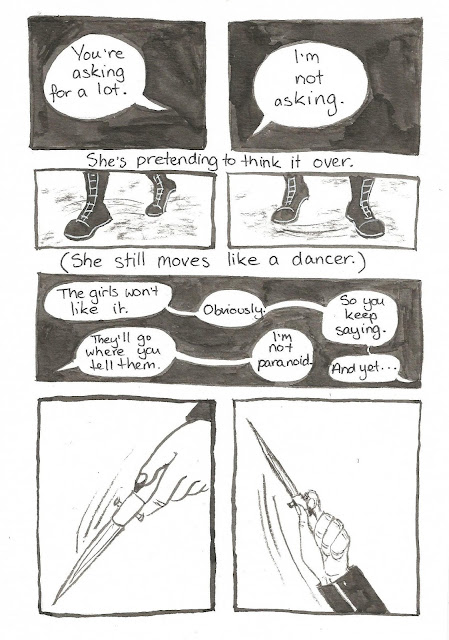 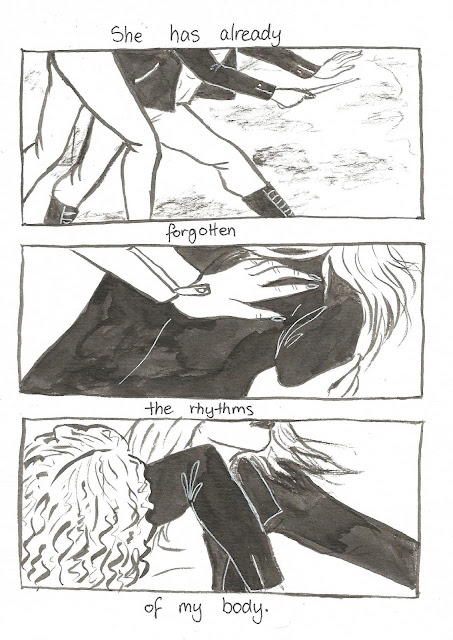 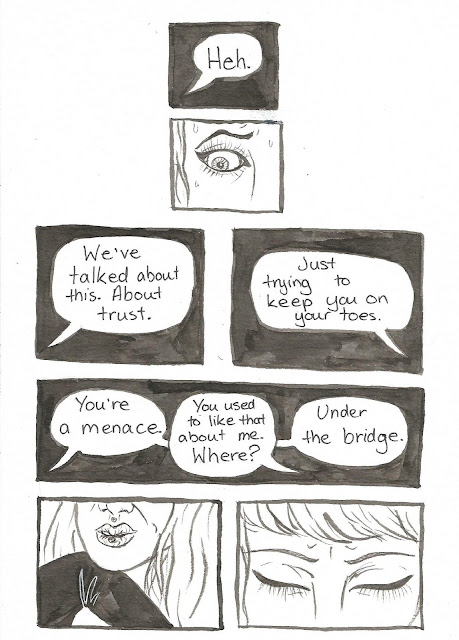 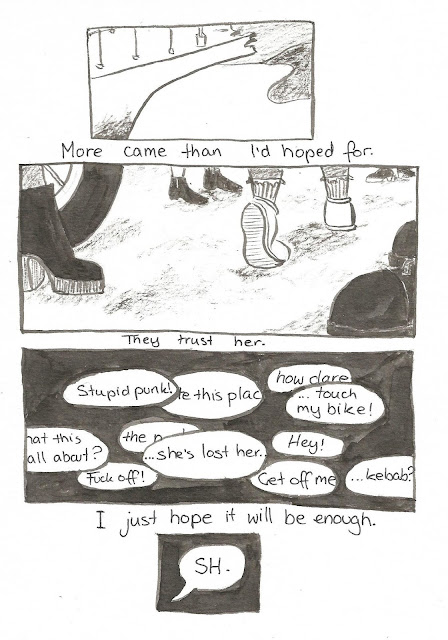 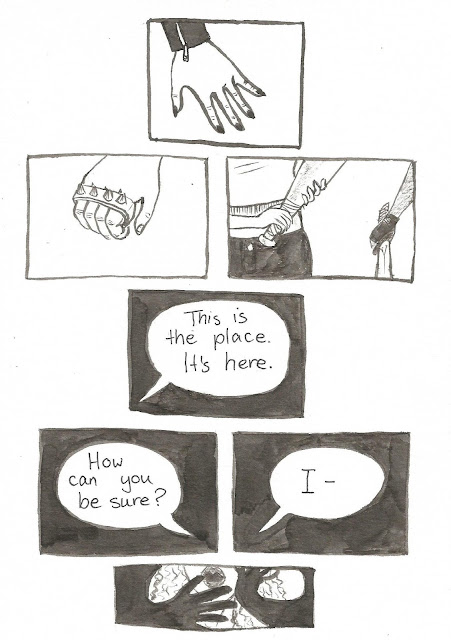 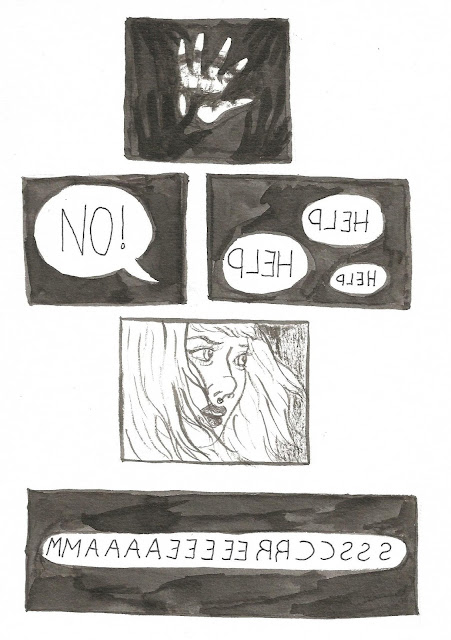 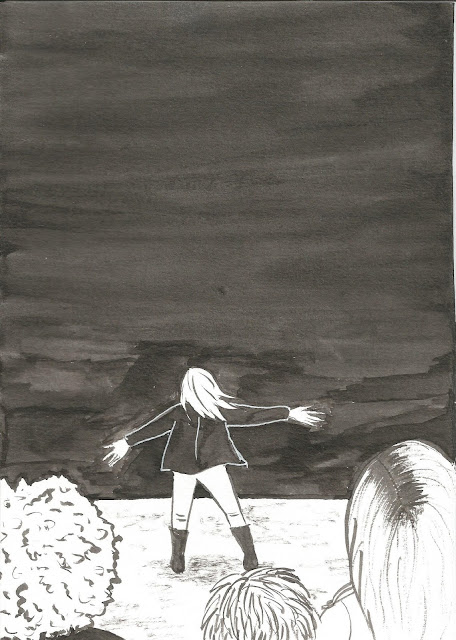 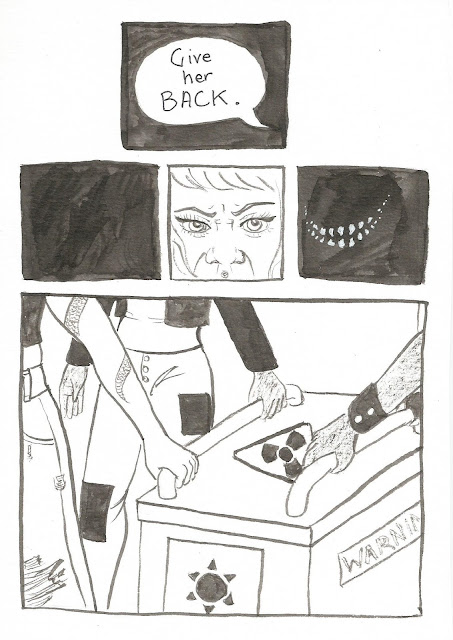 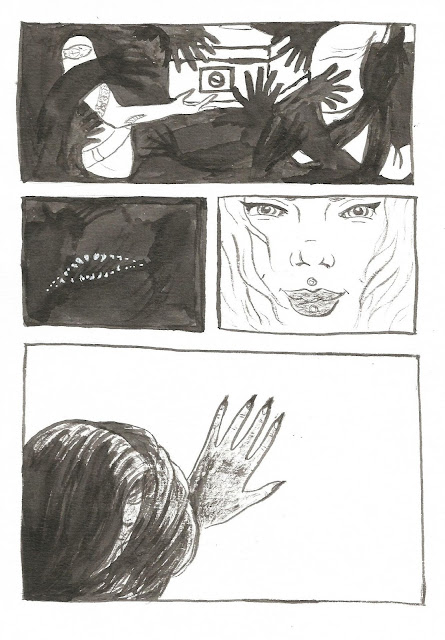 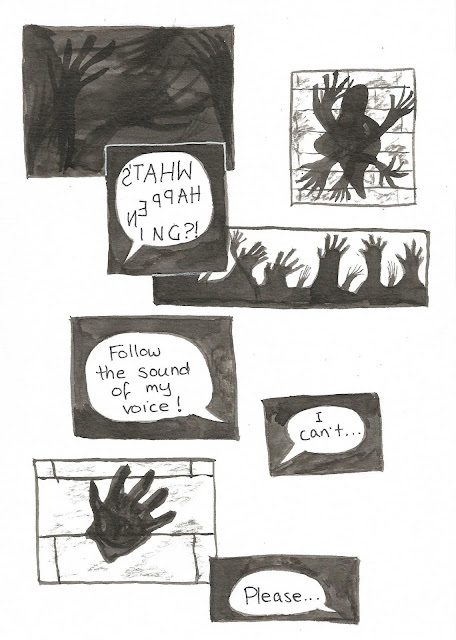 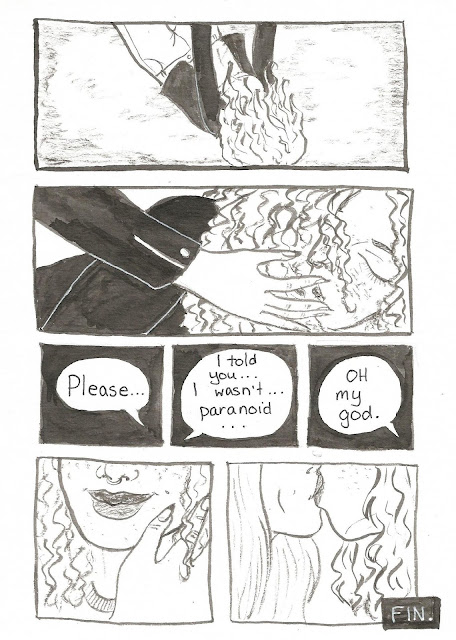 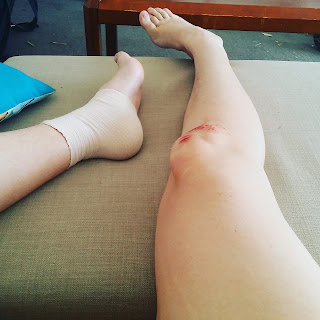 Realisation that the blood was still wet

Pressing skinned knees into the tram floor to retrieve an empty iced tea bottle. My tram voice is louder than it used to be

K, G and I follow a trail of blood from a creep kicked out of G's neighbour's house. We debate the projectile capacity of veins vs arteries

There's a hole in one of my gorman socks. I do a mental catalogue of everything by the brand that I own and realise I'm a much bigger sucker than I thought


(uncatalogued: several days of passing the emergency room doors and noticing the puddle of blood is dried now, dark red, never cleaned. Fondness for the word 'biohazard')
Posted by Bonny at 05:47 No comments:

A Cute Thing That Happened A Couple of Days Ago 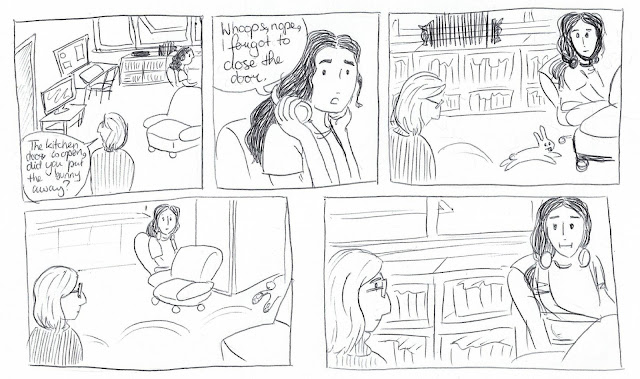 Today is International Women's Day! It is also about a million degrees and I am very warm and uncomfortable but I'm powering through to bring you some music videos by cool ladies that I am convinced exist in the same universe. There's probably not a great feminist message here but my underboobs are really sweaty so it's fine.

First up to set the scene is Kill v Maim by Grimes. I love this video so much? Anyway, this is the cool cyberpunk world full of bright clothes and girl gangs that this MV fanfic takes place in.

Next up is Toxic by Britney Spears aka possibly the best MV of all time? because this fic is about lady assassins. More world building! Britney is one of the first assassins in the agency later taken over by...

Taylor Swift in the Bad Blood video, obvs. Linking these two was one of the first thoughts I had when I saw Bad Blood (I'm kinda mad Britney didn't have a cameo?). There are obvious references in Bad Blood to Toxic and nothing will convince me that they aren't part of the same narrative.

After Taylor's fight with Selena destroys a bunch of stuff, including the agency, female assassins everywhere are going rogue and making splinter groups, with apocalyptic results. That brings us to this awesome video I just discovered for the song Sexy Love by South Korean act T-Ara. The video seems to be part of a larger series? Anyway, for fic/headcanon purposes this clip shows splinter groups and survivors in the wake of T-Swift's girl-hate-ocalypse. There are swords! It's great.

Even though comets apparently destroy the earth ?? in the last video there are still survivors. Led by Beyonce! Because girls are still on top. Feminism! I just love assassins and fashion and the apocalypse, it's fine. Beyonce for President.

I'm going to a Graduate Job Fair tomorrow and maybe I will dress like an assassin? I hope you are surviving the heat and that you have a nice day and don't do crime for money. Goodbye I am too warm why do I have a velvet desk chair.

Apparently in some European countries, what the US refers to as an Indian summer is called a 'grandma's summer' or 'old woman's summer'. I can't wear my perfect new jeans when the sweat sticks them to the backs of my knees. I want to want to feel warm. I also want to go to the beach, which is logistically difficult. 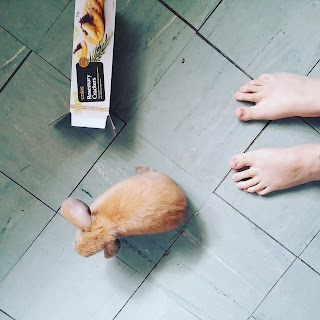 We've had a rabbit, called Captain Honey, for a week and a half now. I can't be sure, but I'm pretty convinced that she is everything good and pure in the world. She's also subtly ombre, which is very aesthetic. 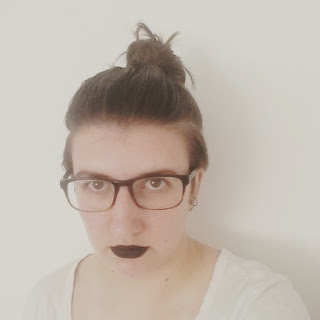 I've been listening to old punk and emo music more lately.The music helps. So does finally owning black lipstick. The mall goth in me will never die. I watched some of an incredibly tacky and offensive series on Netflix about women who have murdered people and the woman in the dramatic reenactment of the Brisbane vampire murder had the same set of tarot cards as me. Imagine what my parents would say. 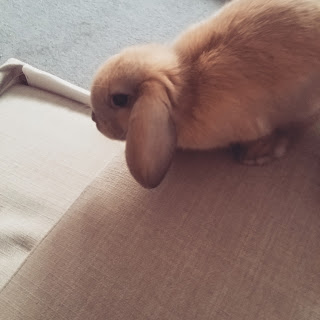 I'm actually very optimistic about things at the moment but last night I didn't have a proper dinner or get a decent night's sleep. Someone did screaming burnouts up the street at 2am. Some men talked about picking up chicks. The wall of the shower is smeared with blood from the mosquitoes I've killed. I hope the rabbit doesn't die.